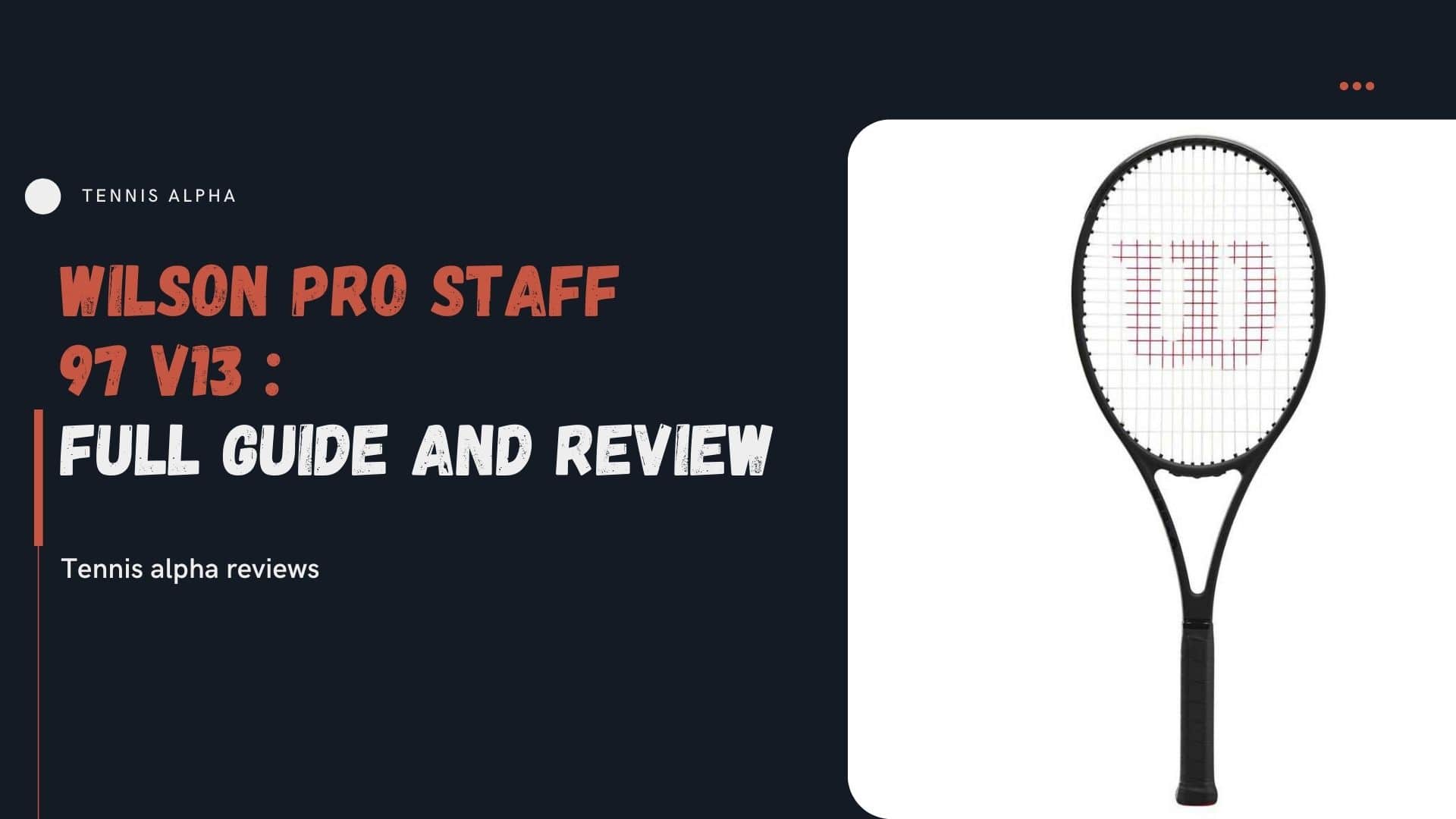 After reading this article you will get to know all the characteristics as well as the pros and the cons of this amazing racquet.

If you are in a hurry and you don’t wanna read the full Wilson PRO STAFF 97 v13  review, we made it easy for you, just read this quick review to check out the characteristics of this amazing racquet.

Who is Wilson PRO STAFF 97 v13 tennis racquet for?

The Wilson PRO STAFF 97 v13 is for competitive intermediate and advanced tennis players with good technical level and power. You will have more control over your shots with this racquet and it will help you to be more stable when hitting.

This racquet is a great racquet for attackers who like to finish off points at the net. Players who are looking for a racquet with great control and stability.

taking a look at the specs of the Wilson PRO STAFF 97 version 13 together,  it has a head size of 97 square inches just like the Wilson pro staff rf97 v13 now this one also has that standard 27-inch length, and now the strong weight is where we start to differ a little bit from the rf 97 this one comes in a little bit lower at 330 grams but even at that lower weight it is still a healthy amount of weight especially compared to a lot of the other racquets on the market this is a pretty heavy racquet compared to most that you’re gonna see on the shelf.

They went with an all-new braid 45 which is just a different way of braiding the graphite to do it at a 45-degree angle in certain areas of the Wilson PRO STAFF 97 v13 and apparently it’s supposed to increase the feel and ball pocketing feeling of the racquet you will feel good ball pocketing with this one great feel from the Wilson PRO STAFF 97 v13 as well now that could be from the braid 45 or could be from other factors of the racquet but the racquet did feel really good and maybe this braid 45 is something that is working now the string pattern here is a 16 by 19,

Wilson used string mapping technology which tracks the way the players hit the ball and what they found was that most players are impacting the ball slightly higher than the center and that’s just due to the change of style of most players a lot of players are hitting with more spin more open stance shots and that’s just the nature of the game now as it’s shifting towards a more modern style spin heavy style.

so what Wilson did to kind of match the change in the game is they actually made the string pattern a little bit denser a little bit higher up from the center so it maintains great feel and control in the spot where you will be hitting the ball the most which is just slightly above center so that was a really smart choice from Wilson to do with the Wilson PRO STAFF 97 v13 and it’s definitely a noticeable change.

so starting off with the styling of the Wilson PRO STAFF 97 v13 I absolutely love the styling it, I think they went with a classic and classy design just like the Wilson pro staff rf97 v13 one thing that I really like about this racquet they did a call to their heritage and where it all started with the pro staff with the pinstripe design it really calls out to the pro staffs that came before.

I like when a racquet company really shows the history of the racquet and since this is version 13 of the Wilson PRO STAFF  there is a lot of history behind this racquet as well as the legendary players who have used the pro staff racquet like Pete Sampras and Roger. Federer so that was a really cool touch that I really liked.

Just like in the Wilson pro staff rf97 v13 the Wilson PRO STAFF 97 v13 got an exposed carbon fiber which they have in the top of the hoop which looks absolutely amazing on this racquet and so the styling of this racquet is really impeccable in my opinion and I’m going to give this racquet a 10 out of 10 in styling another perfect score for Wilson.

the volleys and serves with the Wilson PRO STAFF 97 v13 were absolutely amazing I felt like I could just pick my spots on the serve to follow it up to the net and just do whatever I wanted to once I was up at night and a lot of that has to do with a little bit higher weight compared to other racquets as well as the balance of the racquet.

you guys know that Wilson places a lot of that weight at three and nine in the loop of the Wilson PRO STAFF 97 v13 which gives you really great control and stability at the net and so hitting those low volleys hitting the slice volley drop volley anywhere you any kind of volley you want to hit it just responded absolutely amazing.

the Wilson PRO STAFF 97 v13  is pretty hefty so you’re gonna have excellent plow through the ball and you’re gonna have a ton of power as long as you’re contacting the ball out in front hitting cleanly through it it’s gonna feel absolutely amazing of course it’s not gonna be as high as that rf 97 which has that even higher swing weight but it’s still plenty to hit winners from all over the court and so for those reasons I’m giving this racquet an 8 out of 10 in power.

because of the stability of the frame as well as that nice ball pocketing that you feel, it feels like you can place the ball anywhere off of the Wilson PRO STAFF 97 v13 especially on the serve and up at the net and those are two things that I also found with the Wilson pro staff rf97 v13 and although this has that 16×19 string pattern because Wilson used the string mapping technology on this to make it a little bit denser where you’re hitting the ball it feels like an even tighter pattern than what you might see on paper so for those reasons, I’m giving this racquet a 9 out of 10 in control

this is where I think the Wilson PRO STAFF 97 v13 really shines above the Wilson pro staff rf97 v13 because the rf97 I found just too heavy for the average player this is something that an intermediate or advanced player can pick up feel comfortable with maneuvering around the court for long periods of time and it just performs excellently in maneuverability from all shots this isn’t a small light racquet like v-core 95 so it’s not going to max out in the maneuverability but it is very maneuverable for what it is and so for those reasons, the Prostaff 97 gets a 7.8 out of 10 in maneuverability.

like I said Wilson used that new braid 45 technology to try to add more feel to this racquet I personally think that it really worked because the feel from the racquet was absolutely amazing and a lot has to do with the stability as well because you’re not getting that shock and wobble from the Wilson PRO STAFF 97 v13 and so really any shot that you hit just feels great.

there’s a lot of communication between the racquet and the player which I really like and when you do manage to hit the sweet spot it is really nice and the nice thing is that they did move the sweet spot a little bit so it feels like I’m hitting the sweet spot more often which is something that just feels great as a player so for those reasons I’m going to give the Wilson PRO STAFF 97 v13 an 8.9 out of 10 in feel.

The cool factor of the pro staff 97

the Wilson PRO STAFF 97 v13 is a racquet that has a ton of history like I was saying before it’s a racquet that was used by some of the best players of all time such as Pete Sampras and Roger Federer but of course, this isn’t the Roger Federer autograph so that takes a little bit away from the cool factor just because roger himself did not put his finishing touches on the racquet as he did for the rf-97.

If we think about all the other things that go into the cool factor of the Wilson PRO STAFF 97 v13 this is hands down one of the coolest racquets available on the market right now just because of the heritage of the racquet.

Like I said before and the fact that there have been so many iterations of this racquet that have been legendary so for all those reasons I just mentioned this racquet’s getting an 8.7 out of 10 in the cool factor

I can tell you that the Wilson PRO STAFF 97 v13 the standard version is a much easier racket to handle compared to the Wilson pro staff rf97 v13 and then a lot of that is just due to the added maneuverability that you get from having that lower weight this racket felt extremely comfortable it was very confidence-inspiring from all areas of the court.

You will get great stability, I really love the stability of that racket you will be able to feel confident in all the shots and excellent stability from the frame it gave barely any wobble just plowed right through the ball and the contact just felt absolutely sublime.

The Wilson PRO STAFF 97 v13 provides the control, speed, and maneuverability to let you work on your game and to take the ball out in front hit the ball a little bit earlier, and finish up that net as much as you can.

this racket really helped all of those things and provides good stability and especially up at net this felt like a magic wand just like the Wilson pro staff rf97 v13.

The Yonex Vcore Pro 97 HD is for advanced players who want maximum control and comfort, players with a good physique who can generate their power.

Yonex Vcore Pro 97 HD gives you different qualities a great control of an 18×20 the kind of weight and stability that you’re looking for if you’re an advanced or intermediate player, it’s also really whippy and maneuverable, you can get some great power and spin out of it.

This racquet is a great option for advanced players who are looking for a mix of control and power, it’s one of the famous racquets in the market and it’s a good alternative to the Yonex Vcore 97 HD.

The Head graphene 360-speed pro provides easy access to spin with good maneuverability it’s not powerful as the other racquets but for someone who is looking for more control, this may be the best choice.

So guys this was the Wilson PRO STAFF 97 v13 review, which part of this article do you like most? Let me know in the comment section!

Now is your turn to pick one up and to take your game to the next level.