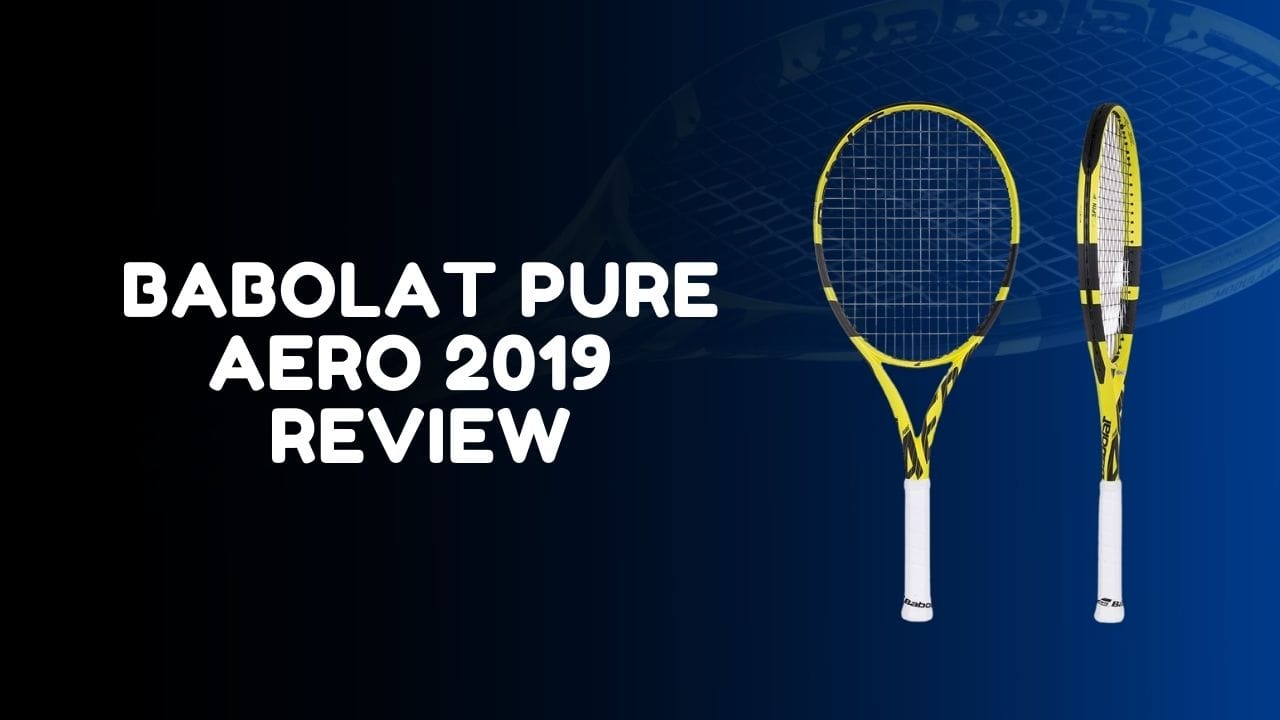 the Babolat pure aero is thanks to Rafa Nadal, one of the most popular racquets of all time.

It is good to point out, however, that he still plays with that original addition. The first version called Arrow Pro Drive under the most recent paint job.

This pure aero is also tailored for Rafa in the way that it packs massive spin flows easily through the air and despite the thick beam and comes with explosive power and this update comes with specs true to the aero heritage, but a slightly lower stiffness rating.

After reading this review, you are going to discover the features of the latest version of the amazing racquet, we will discuss the pros and cons and give you an overview of the technology behind it.

Who is Babolat pure Aero 2019 racquet for?

Well, the Babolat pure aero is for players who have a modern technique and hit with a lot of spins. I think they can really demolish their opponents with this stick. If they’re on their game.

And I have to say I think that I found the racquet for a 318g strung weight to be quite stable.

Unlike the old version of this racquet, The cortex dampening system on the new Babolat pure aero that was on the top of the handle has now been moved into the head instead and there are also new spin Gromits to create more movement for extra spin. I think this is similar to the head MXG and a few other racquets like head extreme.

It’s kind of a trend that they’re trying to create more movement from the main strings to create more spin and power, and it potentially also increases the comfort level a bit.

I do feel when the setup is stiff and older in the Babolat pure aero, this is a softer addition of the pure aero. It still felt quite stiff.

It was also in stock form, slightly wobbly on off-center hits. This was easily helped with just adding four grams of lead tape at three and nine.

But I think that could have upped the swing weight in the stock forum and made it a bit more stable, would have been just slightly higher, maybe from three to four or two, three hundred twenty-eight or 330.

I did like how it hit on groundstrokes. It really encouraged me to blast away, you could take control of a rally from the first hits.

It also worked really well. If you’re a defensive player and you like to dig up shots from the corners as Rafa does.

The racquet power definitely helps to get more depth than spin.

Also in shots to where you just get the racquet on the ball. It also performed really nicely on Dropshots.

You can get crazy spin like the ball is jumping back on your side of the nets, but the feel on volleys was not top class.

I think the lead tape helped, but this is not really a procession instrument, so you need to go for bigger targets. You can still be very effective, but you might need to hit that extra shot.

The  Babolat pure aero is an extremely powerful racquet. It’s a lot of fun to use, but you can’t get that 100% confidence that you can with a control or entered racquets.

Babolat pure aero 2019 played better than the predecessor. It’s a bit softer. It’s a bit less powerful and offers a better feel I strung it up with the MCV focus hecks soft at 25 kilos. This is a new string, It’s aimed to be a good quality that offers spin and snap back, but it’s still a bit softer. Similar to Solem couture bite’s soft or Blaxland, Forgy, soft, etc..

They also have made the field closer to the 2013 GT version, and that is still used by several pro players such as Marino and Benwell Power. This one might be even more comfortable than that.

So I think that this is a. Updates. Good choice for aggressive baseliners. It’s relatively light to swing you get that extra spending power.

But for flat, Peter’s looking for a position and players who aren’t issues, there are better options on the market for sure.

Just like the Babolat pure aero this racquet is for intermediate and advanced players, who are looking for more control through the compact head and thin beam. even if this racquet is lighter and faster than a classic player’s racquet, it still feels strong at impact.

The same as  Babolat pure aero, this racquet is for intermediate and advanced players who are looking for more power, it’s great for aggressive players.

If you have a heavy baseline game based on spin,  the  Babolat pure aero 2019 racquet will feel right at home. So the target group for this state is quite clear. It is definitely a good update. It plays better than the previous edition.