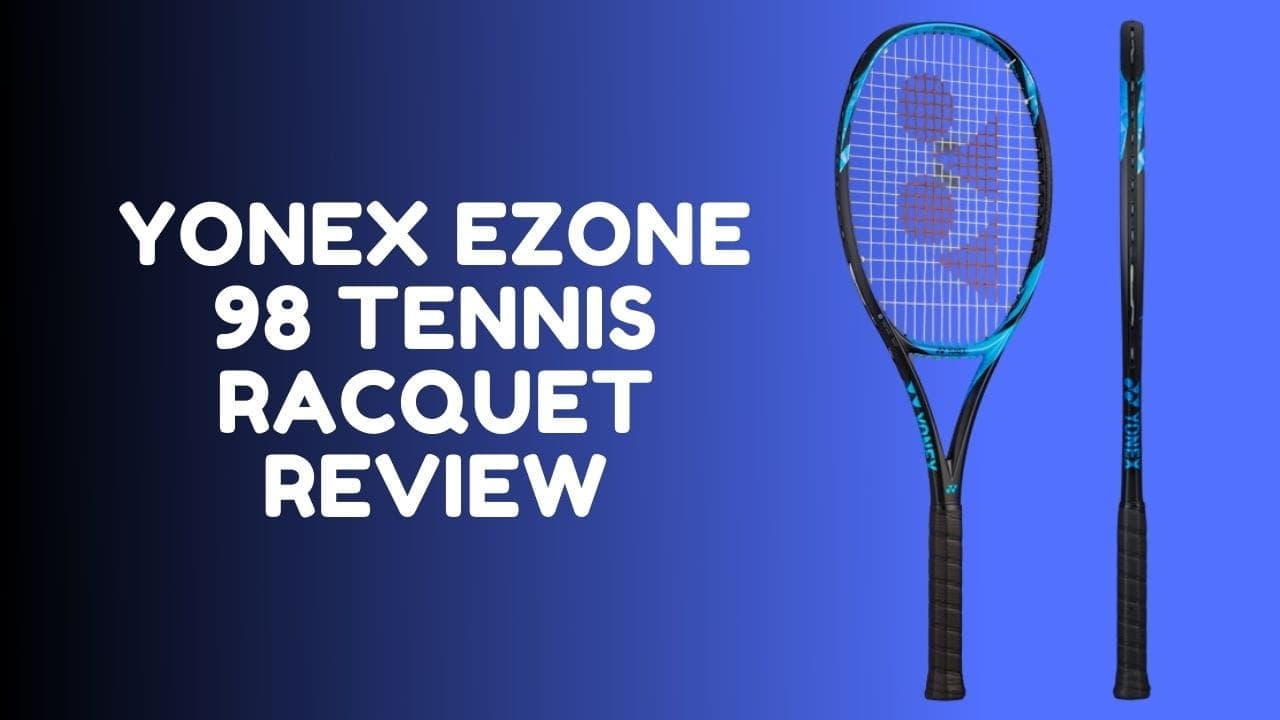 It also has some neat tech it has the isometric head shape but also has some M40 elastic graphite which is meant to be very elastic giving you a nice sort of flex but also some good stability.

And I have to say I think that I found the racquet for a 305 weight to be quite stable but it did feel quite flexible and it certainly felt quite wimpy mainly because of that 317 swing weight.

Also, it has a vibration mesh in the handle.

Well, I guess you think of opposed characteristics when it comes to racquets, power, and spin on one hand control and the feel on the other.

Yonex Ezone 98 is the racquet where power meets the control according to Yonex.

I’m quite a fan of Yonex as far as tennis manufacturers go. The isometric famous head shape is slightly different from the other manufacturers and they claim that increases sweet spot.

And I have to say that generally when I’ve hit with Yonex racquets I kind of agree they do feel like they’re a bit more forgiving.

So I think that that isometric shape does give a bit more forgiveness. Also, the quality of their manufacture always seems very good.

I mean the racquets are manufactured in Japan not China like a lot of the other brands. Furthermore, their paint jobs are always fantastic.

They just feel really good. What I also like about their manufacturing and their tech is that when they claim that they will do something it does generally seem to be the case so the Vcore Pro 97 ranges their control range and, those racquets deliver a nice lot of control, the Vcore 98 racquets are their spin racquets and certainly, I would agree that they do deliver a lot of spin.

Also, quality control and its manufacturer seems to be very good. So if your game is advancing you would probably want two racquets that are pretty much the same

Now with most manufacturers. You’d probably have to go and get two racquets and get them professionally matched by that retailer or somebody else to have direct comparables but with Yonex however,  you can be pretty sure that you can go and buy two racquets off the shelf on strong they will be largely the same weight.

So their differentiation in their racquet manufacturing is good.

The specifications are still similar to the previous version but when I hit, I feel the real difference in control and bending, which makes me enjoy playing with the upgraded Ezone 98.

Flex is harder than before and it gives me extra help when I need it most. There is a good balance between power and control, which allows me to push the shot easily to the depths and attack immediately.

On the latest version of Ezone, it wasn’t that good. However, this updated version found completely different results, and it reminded me of the Yonex Ezone 98 DR version. Due to the addition of M40X technology in the throat, it has excellent stability and flexibility this makes more solid volleying performance, and also it is easy to generate power.

The service felt very natural using the Yonex Ezone 98 Tennis Racket, making it easy for me to control the court.

The fairly open 16 x 19 string pattern, makes it easy to slice and kick the ball. It still feels more controllable when serving, which allows me to choose my position and keep the returnees balanced.

Yonex Ezone 98 has an open 16 by 19 string pattern which delivers a nice lot of spin. But if you notice the pattern they have some technology which sort of lowers the spacing of that around the sweet spot and at the center of the racquet.

I do think that comfort in racquets is really important and it’s kind of underestimated by a lot of manufacturers nowadays. And with regards to that Yonex Ezone 98 Tennis Racket is a very comfortable racquet.

So if you were looking for something that offers you a lot of things but comforts on your mind or if I guess like me you’re getting a little bit older and you are mindful of not getting injured then absolutely the reason is a really good racquet.

So I think this is one to watch. I mean I think this is a racquet that delivers a lot of the hundred square inch characteristics because of that isometric head shape it does give amazing spin potential and it has a lot of power.

I think it’s very forgiving but it also I think matches up with a lot of the racquets in that 98 square inch space around the control.

Now I kind of get that the Ezone is the power and spin line. But if that was your main consideration wouldn’t you go and buy the Yonex Ezone 100which has that hundred square inch head and the 300 gram on strong weight.

kind of competing with the pure drives and the pure aeros of this world. So I never really understood where the Yonex Ezone 98 cents and when I compare it to the Yonex Ezone DR 98. and the most recent version of it, then I started to understand what I think they’re trying to do.

The DR is a fantastic stick. Lots of people hold onto the DR as being an amazing control orientated racquet with a nice feel that was unique.

Now next took a step away from that with the most recent version making the more recent version of the easier in this racquet more powerful and people weren’t particularly taken by it.

I guess it was kind of pure drive but not a pure drive so it didn’t see its space.

So you get a feeling with this current racquet that they are trying to take it back towards the DR  little bit more control nice feel orientated playing racquet and I have to say that it does deliver.

It reminded me very much of the DR. And when I hit the next to the DR it was very comparable.

What made the DR quite special in my view was it was slightly heavier a 310 grams on strong weight. And this Ezone feels like a sort of development on the previous version still at  305 grams.

So I had a bit of an enlightening moment with it where I just added a little bit of weight at 12 3 and 9 took it up to about 310 312 and strong which I guess was like the previous DR.

And at that point, I had an amazing racquet on my hands. It was more stable the swing weight was taken up a touch probably around about to that range that I like around about the sort of three to five to 330 and all that power spin was coming through it still felt so flexible. It was still very maneuverable.

It´s a comfortable and controlled racquet. this racquet is great for intermediate and advanced players with flatter powerful strokes that need more control.

The racket is suitable for intermediate and advanced players, who are looking for more control through the compact head and thin beam. even if this racquet is lighter and faster than a classic player’s racket, it still feels strong at impact.

it’s for players who have a modern technique and hit with a lot of spins. I think they can really demolish their opponents with this stick. If they’re on their game.

So guys Here is the complete review of the Yonex Ezone 98 Tennis Racket 2020, which part of this article do you like most? Let me know in the comment section!

Now it’s your turn to pick one up and customize a little bit more weight to make it a fantastic racquet in my view.